The Arnhems Trumpeting Corps or as said in Dutch ‘Het Arnhems Trompetterkorps’ (A.T.K.) was founded in 1973 and grew steadily into the present full-bodied entity which is well known as a marching band and a show orchestra. The ATK has been at all major Dutch civilian tattoo’s and also participated at the military tattoo's of Breda (Holland) and Frankfurt (Germany) in Frankfurt's Tradeshow's Hall.

The corps has been invited several times to make a tour along the French Riviera. Furthermore the ATK has participated in concerts en tattoos in Aabenraa Denmark, Iserlohn Germany, and Gent Belgium a several times.

Since 2009 the band is musically lead by Marcus Kerpershoek. Most of the Music played by the band are composed or edited by him.

The corps has a selection of colourful uniforms, when combined with an “easy on the ear” musical presentation the audience is provided a compatible marriage of sound and colour. The band performance is always a highlight of any organized event. 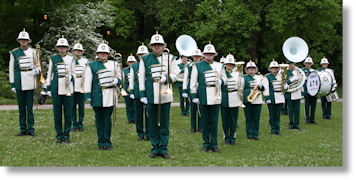 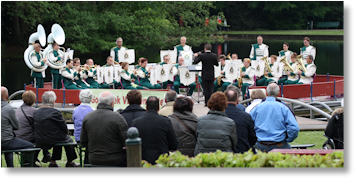